Under the Deep Blue Sea 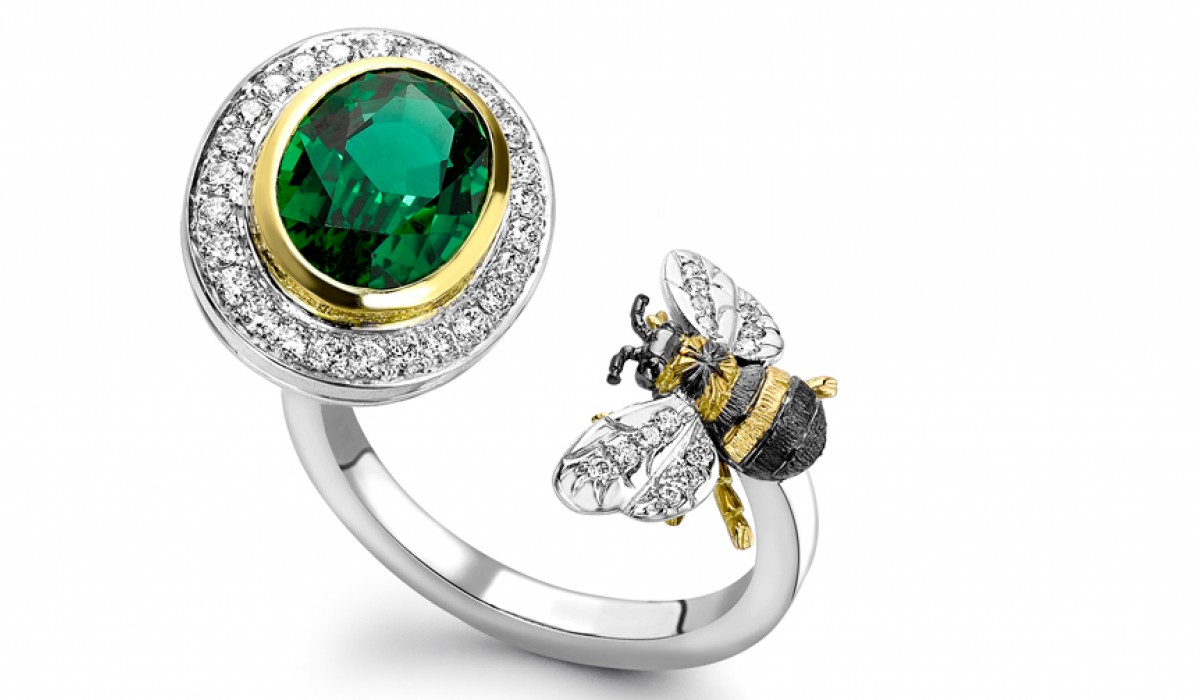 Class and imagination are terms used to define his creations. Some consider him The King of Bling, while others simply as 'the Master'. A story within a story of a champion.

His name is synonymous with witty, quirky and unique pieces of jewelry. All handmade. Alister Theodore Fennell, or simply Theo Fennell, is one of the most interesting, creative and appreciated British designers in the industry. His creations are considered small works of wearable art crafted by hand in the brand’s London laboratory, combining gold and platinum with precious stones and refined carvings and a whole lot more. Such as his latest creations, "casket" rings, such as the rings Over the Rainbow and Sub-Aqua, which respectively, house a painting and a small jar full of gold coins. "I don’t think anything conveys more emotions than a piece of jewelry”, as Theo says, during a meeting in his London laboratory, the real sancta sanctorum where all the designer’s ideas are born because “a jewel touches something deep inside, moving and transporting you to incredible worlds. "With typical British understatement he goes on to highlight that "jewels are not fundamental or essential items but spices of life that make it more fun and attractive."

Fennell's unmistakable and eclectic style combines elements of Pop art such as Heinz ketchup, Marmite, Smirnoff vodka and music, "Elvis, Liberace and Elton John are the only ones who knew how to wear jewelry like a nun." For him elegance is something special, not just the way you dress, it’s" an attitude, a way of being" perfectly represented by his father in his colonial uniform or cricket whites and Fred Astaire," an American with English charm, or rather, European, fascinating," as, for example, "when tapping on his silver cigarette holder he shows the potential jewelry has of stirring the imagination. Not to mention the incredible cuffs he wears in Top Hat, an essential element of clothing. Cuffs already represent a passion of his, almost an obsession "I’m a real Imelda Marcos about them, I have over thirty pairs and am always on the look out for new ones." Theo, the son of a soldier, was born in Egypt, "the Sphinx, was an inspiration for the beautiful and mysterious" and together with his family he has lived in "Penang, Singapore, Pakistan, France and Germany." Traits such as a burning desire to discover, multiculturalism, and a predisposition to absorb any external stimulus able to arouse his interest, feature in many of his works, some of which are inspired by landscapes and childhood emotions. Back in England, Fennell studied at Eton, and attended art school in York and, later, Byam Shaw School of Art in London. In the early seventies he was a young graduate "with a vague idea of what job to do. It had to be something creative, but I didn’t know what. I was doing portraits and didn’t give much thought to jewelery, not even as a subject taught in art schools." A situation very different from today. "I think there are at least 7,000 more jewelry designers then when I started." So his priority was to "look for work", which came unexpectedly, as he recalls "by Edward Barnard, a silversmith of Hatton Garden", who hired him as an apprentice and designer in his family workshop. Theo enjoyed following an ancient tradition capable of reinventing itself "taking what it needs from reality, while remaining true to itself," in working methods and procedures and was won over by the idea of being a 'craftsman who gives birth to something special " through his work and hands. In addition to the commitment in the atelier, he also began "designing pieces for friends. Word began to spread" and the rest took care of itself.

Later came the first store in Chelsea, in 1982 followed by boutiques in Harrods, Selfridges and Harvey Nichols and finally Fulham Road, the current home of the Maison. Certainly beginnings are not easy. "I didn’t have a lot of money. Going it alone was a gamble and a constant test. At times I would go to pawn some of my jewelry to pay the bills." For him, handcrafted jewelery is "something more than just a job, a discipline" which applied with patience and love, is something special, artistic, in which "the aesthetic has its value, not forgetting functionality and portability; it’s important to understand that what you create has to be perfect for the wearer to integrate." Like all masters, Theo monitors new recruits who seek to enter the world of handcrafted jewelery. "I often work with students of the Royal College, Central Saint Martin and other institutions and I repeat the same sentence to them all. 'You must have at the same time, a lot of discipline, be practical and not expect immediate results." Many, in fact, believe that "the good old days at college will continue forever. It’s not exactly so, as in the field there is excess demand and only those who work hard will make it', with patience, dedication, effort, hard work and humility. And with a great desire to learn. Not forgetting that, now, it’s impossible to improvise, you have to also know a lot of other things outside the field. For example, you have to study economics and business strategy in order to understand the best possible way to approach a business 'because when I started, I knew nothing and I made mistakes. Now you can’t make mistakes. Technology helps, there is the Internet and organizations and not just investors who sponsor. I know I sound like a boring old uncle who is a bit dazed, but explaining the reality is the best way to prevent destroying their dreams.” The striking thing about all Theo’s work, and especially of his most recent achievements such as the fascinating Sub-Aqua Ring, is eclecticism, "we must never wear blinkers. It would be completely wrong. You shouldn’t be searching for a "look", but something that speaks to people's hearts. Real jewelry is timeless and lasts forever. This rule also applies to less expensive pieces. It’s not just about the monetary value but a cultural factor. Only then can a jewel become part of a person, a part of history. Therefore it is very important that each piece is well-designed and well-made, and can easily make the wearer feel happy. Thus, the lowest common denominator is quality that avoids homogeneity, a quirk of our times." The imperturbable Fennel begins to appear somewhat troubled, his voice ever so slightly thickens with emotion when he starts to talk about the philosophy of some large industrial jewelry brands: "Today there are some big brands that have made people forget the beauty of a unique handcrafted object. The idea of the importance of exclusivity has been lost. Craftsmanship is pure emotion, an ancestral sentiment dating back to ancient times, which speaks of culture and tradition, ancient techniques, people and their tastes, of society and evolution. Pure culture.”

The impetus weakens when the master begins to talk about the archetype at the core of his creative philosophy: work ethic. Work is important to the designer. There is no today, a break, and then a new beginning as "I'm already working on the next thing and I’m always looking for new ideas and new stimuli. I have a great team and we love to see how far my imagination can become reality. What intrigues me most, however, is the journey of discovery of how best to realize and bring each piece to life, how to turn it into something which is both a mystical experience and a little provocative." Need I say more? •