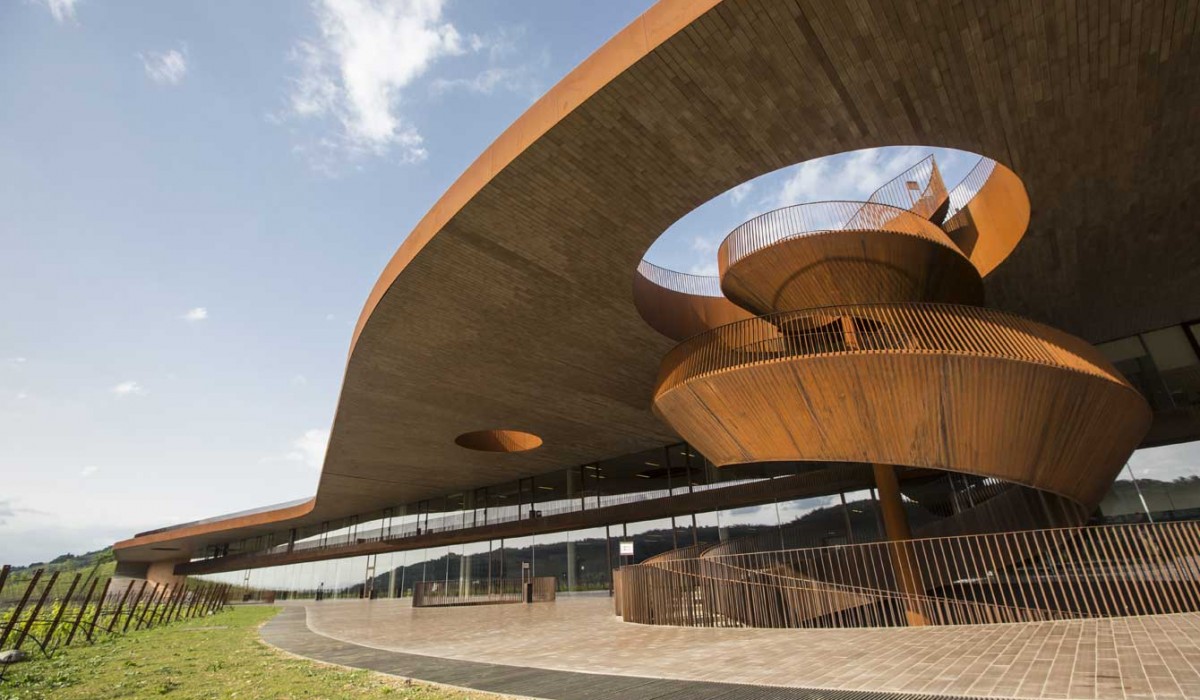 The world’s best architects are measured on the nectar of the gods, creating the most spectacular cathedrals of wine. A journey through the musty scent of some of Italy’s most representative wine cellars. Tenuta Castelbuono: inside the copper-covered dome of the “Carapace” in Bevagna, Perugia. The building - the first sculpture in which it is possible to live and work - is the result of the Lunelli family’s long-standing friendship with Arnaldo Pomodoro. [Ph. A. Mulas]It is possible to find many aesthetic parallels between volumetric jewels of design and prestige, and wineries designed by the starchitects of the moment, from the bubbles of the Nardini distillery created by Massimiliano Fuksas to the carapace of the Castelbuono estate designed by Arnaldo Pomodoro, although no deeper analogies exist.  The most interesting relationship between virtuous oenology and jewelery is in our opinion the concept of luxury that these worlds express, in the sense of beauty reflected from the unique nature of Italian landscapes onto craftsmanship and the quality of the products, be it agricultural or goldsmith, to the respect for the land and human labour which in these contexts become exclusive added values.

A common matrix also lies between the attention lent to image, which renders the necessity of cathedrals of luxury built by the largest fashion houses with broad appeal for the most fashion oriented architects and interior designers such as Mark Newson and Zaha Hadid, and the suggestive vastness of wine producers though in this case too the link is rather more apparent than substantial.

In fact, while the griffes fight it out with cubic meters on the central streets of the world’s metropolis, occupying historic buildings or building new ones, the most famous wineries are located in the hills, isolated from inhabited areas, and thus the evocative power of the context in which they are located is diametrically opposed to that of the flagship store.

At one end of the spectrum, the bustle of the city, at the other the tranquillity of the countryside, concrete versus earth, the shopping frenzy as opposed to meditative tasting time. That is why investment on a structure of the most enlightened wine entrepreneurs begins with different assumptions from that of the fashion world and aims to enhance the culture of pleasure more than consumption, the territory rather than the logo on the facade.

A logo that in many cases is non-existent, being super wineries camouflaged among the vines and often developed in terms of depth rather than height. Also because, the starchitects active in wine cellar design, such as Renzo Piano and Mario Botta elsewhere design great museums rather than applying their wizardry on large commercial spaces.

And above all, a fundamental difference: while fashion can take root anywhere and outsource to the bitter end to save on labor costs, of a qualitatively good level even in developing countries, wine and gold can not be separated from the territories in which vines mature and ateliers find root of the best craftsmen who gain experience and synergies in only certain districts in order to achieve the best artifacts. Hence why in Valenza the big brands of LVMH produce their collections; and the cellars of Marchesi Antinori have been located in the hills of Chianti for five centuries.

The similarities between the two sectors, that of wine and gold, however, end there, as the size of the companies and the numbers they produce are very different, with clear supremacy of wine enterprises over jewellers. In addition, the territorial link for the gold sector is based on human factors, while for wine it is more biological and organic, rooted in the very vines.  Hence the reason why producers of prosecco and brunello can afford the best architectural investments and celebrity architects whose job it is to primarily focus on enhancing the area, to create a structure that blends in with it and penetrate its depths where visitors, after admiring the views over the vineyards, can see the barrels in which the wine matures, follow the processes of fermentation and bottling, breathe the aromas of the grape pressing process and the scent of the wood. The Domini Castellare di Castellina winery, in Castellina in Chianti, Siena, the work of Renzo Piano

Many of the most celebrated structures are in fact partly or entirely underground. Petra in Suvereto by Mario Botta, Tenuta Castelbuono in Bevagna by Arnaldo Pomodoro, Cantine Antinori in Bargino by Studio Hydea, Rocca di Frassinello in Maremma by Renzo Piano, although very different, demonstrate the will assimilated in enhancing and discovering “madre terra “ which, by nourishing the vines, produces the aromatic beverage. “ Perhaps, among the most  wonderful works of architecture - writes Mario Botta - we have to include the special ability to visualize the fleeting and uncertain emotions which weave the tapestry of memory.”

A prime example is Renzo Piano, who before accepting the project of Paolo Panerai and Eric de Rothschild, the owners of Rocca, requested a helicopter flight over the area assigned to the future cellar. “I always need to understand the environment before taking on a project and get a bird’s eye view. An architect must learn to fly. “

In addition to the slower times imposed by the land accustomed to meditation and reflection, we find in the vigneron  a more marked cultural sensitivity than in the jeweler, apart from the case in which vigneron and jeweler coincide, such as the Fasoli family of Brescia which also owns the estate of excellence Cà del Vent in Franciacorta, studded with specific works of art situated in the vineyards. Some wine cellars boast a museum, such as Cantine Antinori, others offer space to contemporary art, such as the Nardini distillery with its Garage, others support artists through sponsorship and restoration of local heritage.

Even more refined is the design project of entrepreneur Alberto Alessi, who bought Cascine Eugenia on Lake Orta in order to produce good wine but also to dwell and promote literary construction of the place, creating a sort of Opera Aperta which Alexandro and Francesco Mendini (well known names in post-modern design) participated as authors of  architectural design. “I worked - explains Alessi - around an aesthetic idea that concerned, of course, the quality of the wine, but also all the things that exist around it, such as buildings, the bottle, the graphics of the labels, packaging, the website, in short, all aspects of communication.” The winery and the “house - manifesto” by Alberto Alessi at Pratolungo, on the banks of the Orta Lake. The “Cascina detta Eugenia”, Eugenia’s Farm, recovery project was overseen by Alessandro and Francesco Mendini. The bottles, produced by the wine company, all numbered, are engraved on the bottom with a pattern inspired by Da Vinci “knots” and “wear” labels designed by Spanish designer Marti Guixé. [Ph. Giacomo Giannini][/ts_one_half] [ts_one_half] On the subject of communication: thanks to these projects so rich in content, the most photogenic and narrative ‘cantine’ have ended up in every international magazine, not only relating to food and wine but also design, art, luxury and lifestyle; they have become books and exhibitions, transforming themselves into incredible media phenomenon, surely at least partly calculated, a great added value for their companies.

Here is perhaps the best example of how the wine world can give to the goldsmith’s art excellent results that can be achieved through investment in deep-rooted areas, such as in the land and quality of production, human capital and its uniqueness, instead of on superficial appearance and furnishings (of the person or the environment in which the products are sold), as seems to be the preferred way in which the jewelry world presents itself to us.

It is true that today clothing and accessories companies exert a driving force in the media world and compete in opening laudable Foundations and by sponsoring the restoration of monuments or old movies, but few bring their clients to get a close up look at the places where they create their products materially and generate poles of artistic interest. It may be true that the laboratories do not scenically sit among the hills, but urban and productive settlements in Italy also have hidden beauties. 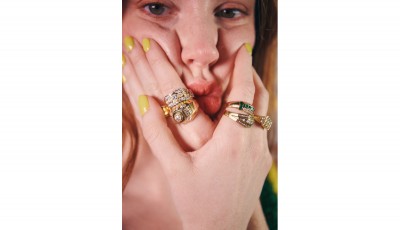 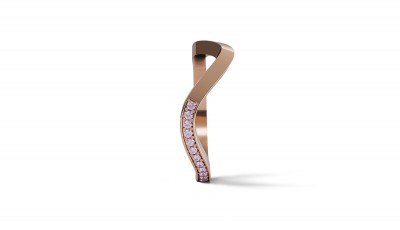 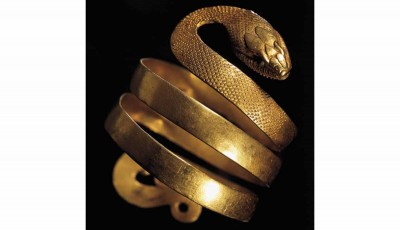 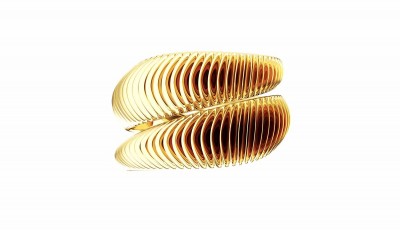