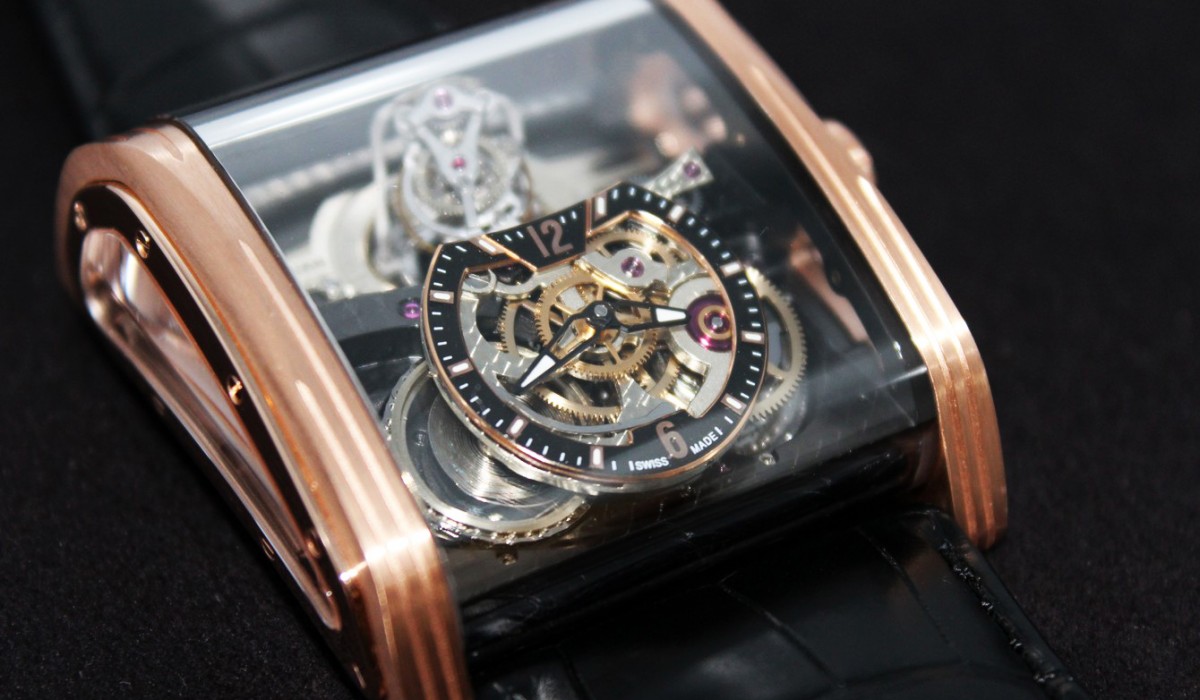 Cabestan DNA finds its definition in the universal history of watchmaking, one of passion, orchestrated by enthusiastic craftsmen who take their inspiration from superior mechanics, and the use of ancestral knowledge associated with noble materials.

Cabestan’s unfettered creative spirit never ceases to amaze with its visionary, wildly intriguing works of art. In 2013, a new team took over the company with at its head, a new CEO and owner, Lionel Betoux. Ever since, Cabestan continued growing and asserted itself as a real Manufacture of fine watchmaking. Eric Coudray, celebrated Master Watchmaker, distinguished inventor of the GyroTourbillon, signs the creations of Cabestan.  All parts of the company's watches are designed, tooled, assembled and hand decorated by the master watchmaker and his team.  Finished mechanisms and cases are also executed painstakingly by hand to magnify every piece.

The extreme precision of Cabestan's movement is provided by the system of fusée-and-chain, enabling the force of the mainspring to be distributed flawlessly.  The driver of the inspiration comes from different models through the identification of natural elements. Cabestan defies the elements to become master of space and time: the oceans, the mountains, the sky...no limit seems to resist. From this inspiration was born the Vertical Emotion collection composed of three emblematic models, the iconic Winch Tourbillon Vertical (2008), the Trapezium (2010) and the Luna Nera (2013).  Still in the quest for perfection, Cabestan revealed its last creation in 2015, the Triple Axis Tourbillon. As a combination of all desirable elements a watch could be made of, it stands as a groundbreaking timepiece. This new model reconciled all watchmaking passionate and timekeeping enthusiasts, from classic, through contemporary, to futuristic style, the creation has spoken for itself.

Some observers define Cabestan designs as retro-futuristic, plunging us into a parallel universe and carrying us back to the epic tales of our childhood. Brimming with history, the new Cabestan watch is based on the alliance between traditional skills, technological innovation and ever more avant-garde design. The Cabestan Triple Axis Tourbillon is the first timepiece to be 100% signed by master-watchmaker Eric Coudray. Inspired by sailing boats, this amazing watch recalls the pure, slim and streamlined shape of a catamaran, while the hand-made pure sapphire tube provides a luminous setting for a unique and exclusive flying triple axis tourbillon. Much like in the production of floating bottled boats made by aficionados of sailing and the sea, the assembly of the movement is wholly done on the outside, and the H-shaped self-supporting plate is then cased up from the side, before the ensemble is sealed by two sapphire crystal windows.

Cabestan DNA draws its strength from the presence of the inseparable fusée-and-chain endowing the movement with peer-less and reliable accuracy by ensuring constant-force transmission throughout the 50-hour power reserve. The flying triple axis tourbillon, geared up with a spring balance oscillating at a frequency of 3 Hz, rotates separately for each axis in 17 seconds, 19 seconds, and 60 seconds respectively, bringing a lively touch to the movement. The balance spring features a Breguet style overcoil with a Geneva stud. An endplate uniformly distributes the curve of the spring. A two-position crown manually adjusts the winding and time setting. Once again, the collection of Cabestan watches extends an invitation to travel, a quest towards light through the mechanisms of space and time.