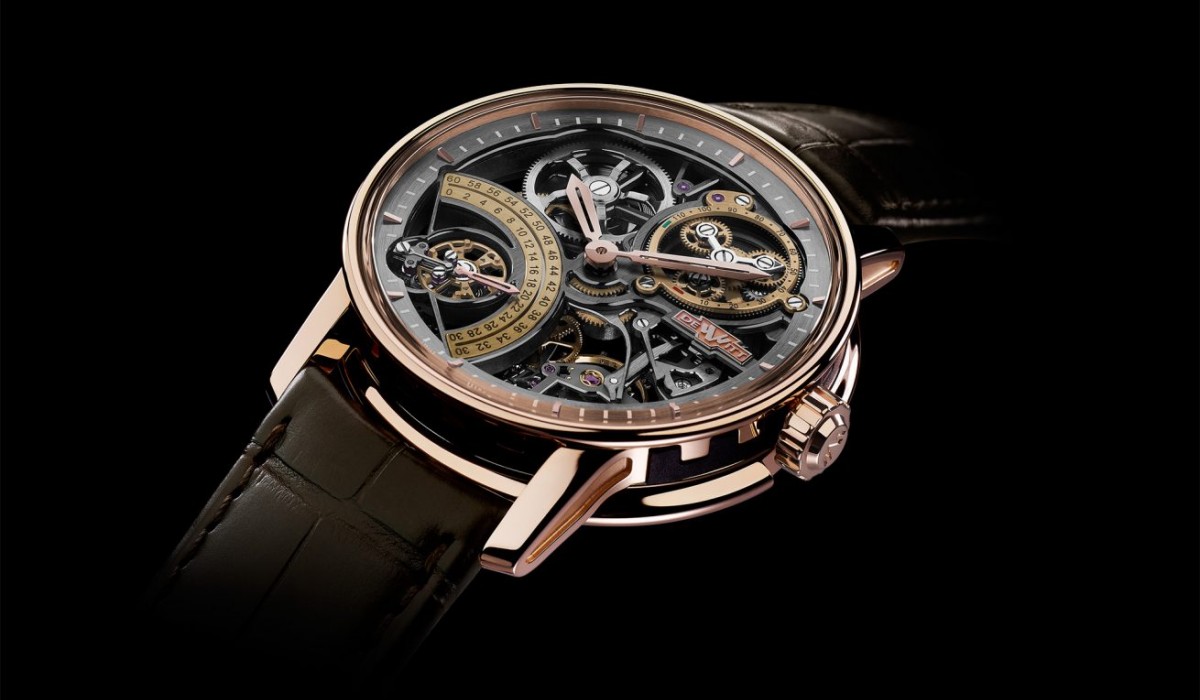 Which watchmaker can successfully claim to have a direct link with one of the most legendary leaders in history? The answer is: DeWitt. The Swiss horological maison was founded in 2003 by Jérôme de Witt, a direct descendant of the Emperor Napoléon, and has made the headlines ever since, thanks to its iconic watchmaking concepts joined with the ability to bring the true spirit of the French commander in every single timepiece. DeWitt’s legacy is all about creating watches that boast the most elaborate complications respecting the best watchmakers’traditions. A bold, ambitious vision that pays tribute to Napoleon’s courage and charisma.

Now, DeWitt returns to its roots by developing a new movement with a strong character that embodies DeWitt both in its aesthetics and in its functions.  For the manually wound skeleton movement, Jérôme de Witt has chosen a highly complex mathematical structure. The power reserve system is based on the satellite principle already created for the Tourbillon Differentiel model, which won an award in the innovation category at the Grand Prix de l’Horlogerie de Genève in 2005. The power reserve is indicated by an arrow located on this differential, which is in constant rotation.

The power reserve, with its indicator at 1 o’clock, has been expanded to over 100 hours thanks to the use of a double barrel. The three-dimensional bridge in which it is housed is itself crafted in the form of a car wheel-rim, a field of inspiration that has often been explored by the brand.  The most distinctive particularity of the movement, however, lies in its bi-directional seconds at 7 o’clock. The seconds hand changes direction after 30 seconds thanks to a disconnecting gear system, and performs an instantaneous jump that sends it in the opposite direction to mark the following 30 seconds. The seconds are therefore indicated in two different directions, which gives the seconds hand a totally new way of moving. The principle is that of windscreen-wipers of certain sophisticated cars, constantly moving backwards and forwards to clear the entire windscreen surface.

So as to highlight these disparate elements, each of which is marked out in its own way by a distinctive design and construction, the “black gold” colour tone skeleton displays a harmonious aesthetic that inspires a sense of purity.  Great care and attention has been paid to the quality of the hand-crafted finishes and the bridges with their indented angles. This manually wound movement is made up of 263 parts. It is housed in the new Academia case, with a diameter of 42.5 mm. The alternating rose gold and rubber serve to recreate the famous imperial columns that are a characteristic feature of the watchmaker. The total thickness of the case is only 10.3 mm. On the case back, the sapphire crystal reveals the wheels sculptured in relief, giving the movement a sense of volume and perspective.

Like all DeWitt timepieces, the Academia Skeleton watch meets the very highest standards of finishing adopted by the Manufacture right from its origins: hand-crafted finishes, satin-brushed finishes, circular graining, polished chamfering and indented angles. This latest and highly inventive watchmaking creation is a true embodiment of the DeWitt spirit.